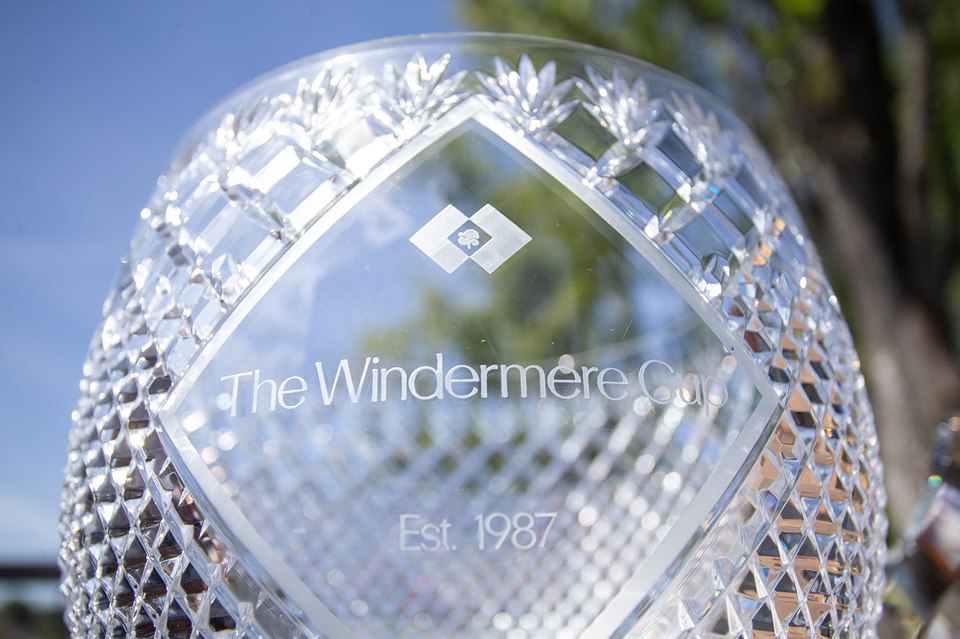 A realization gained Friday night paid off big time Saturday morning when the Washington men’s varsity eight rowed to a decisive victory over members of the German National Team in the final race of the 33rd annual Windermere Cup.

“It was a different mindset for us this morning than last night,” UW men’s coach Michael Callahan said. “It almost shocked us last night because we took some bad strokes. I was like, ‘Yeah, it’s going to be over before you know it. Even the national championship will be over before you know it.’ You have to be focused, you have to be on it. We weren’t then. Today we were.”

Washington built a two-second lead in the first 500 meters with a scorching time of 1 minute 17.1 seconds (a time so fast that Callahan speculated that something might have affected the timing marker) and steadily expanded its lead until finishing in 5:42.134 with an open-water margin over Germany (5:47.042) and eighth-ranked Boston University (5:49.358).

“We tried to control the start last night, and I think that really dialed the guys in today,” Callahan said. “We’ve got to be aggressive off the first stroke and establish our rhythm. It was a good turn of the tide for us between last night and this morning.” 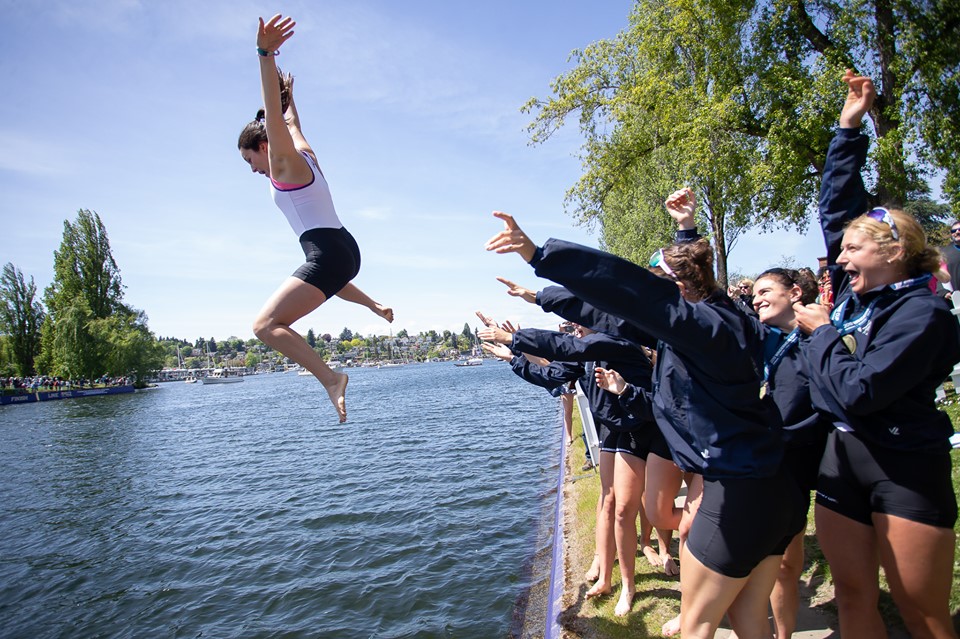 In the women’s feature race on a beautiful morning (mostly sunny, low 60s), Washington’s varsity eight also led wire-to-wire and finished with a 5.5-second, open-water win over Germany, followed by UW’s second varsity eight and UCLA. The Huskies’ winning time, 6:14.379, ranks as the third-fastest women’s time during any collegiate competition on the Cut’s 2,000-meter course.

“There was a tail wind at the beginning, but there was definitely a headwind at the end,” UW women’s coach Yasmin Farooq said. “When I drove my launch under the Montlake Bridge I got hit with it and it actually knocked me sideways.”

Farooq sees the fast time as a favorable indicator.

“The perfect marriage of everything helped that 2017 one go,” she recalled. “That was the year of the confluence of a lot of flow, the wind. But you know what? Great racing on opening day has been a good sign for us in the past, so we’ll take it.” 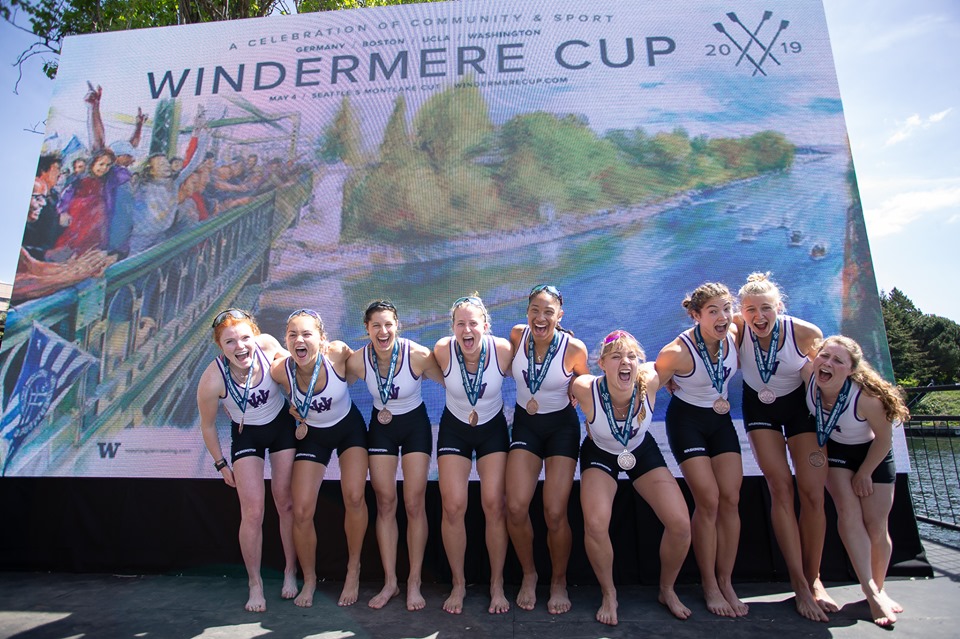 UW won the women’s national championship in 2017, and the 2019 team is virtually certain to retain its No. 1 ranking heading into the Pac-12 Championships on May 19. 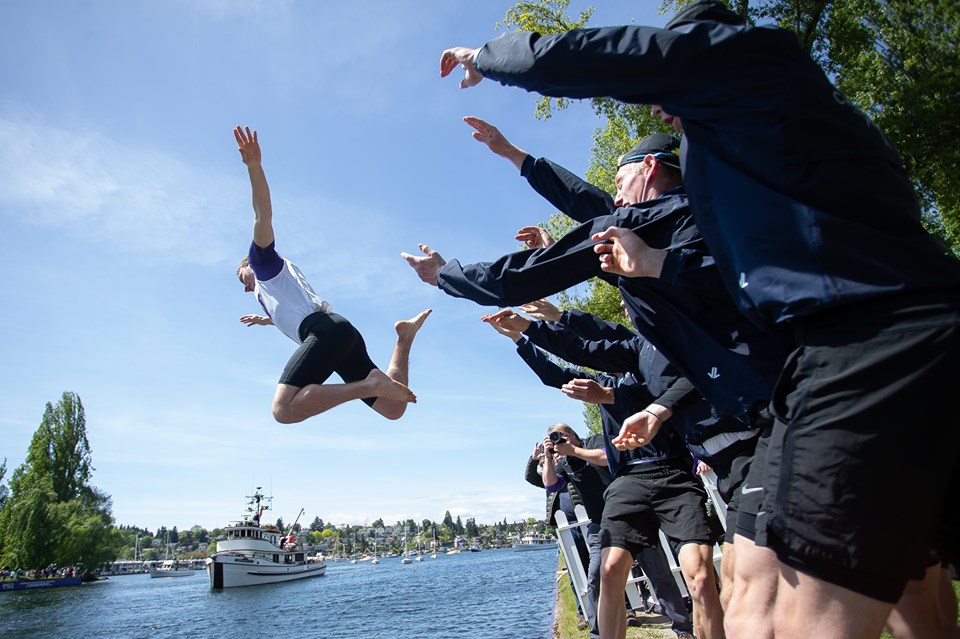 The men’s varsity eight included Adam Gold (Seattle Academy) as coxswain, Sam Haalbert (Woodinville) as the stroke and, making his first appearance in the V8, Tennyson Federspiel of Bellevue in the No. 2 seat.

“It was awesome,” Federspiel said. “I’ve been in the 2V since my sophomore year, and I’m always fighting to be in the varsity boat. Last night it was a little bit crazy, but it was great to be in it today. We’ve been practicing confidence as a team. We wanted to go into this with as much confidence as we can, and it was nice being up after the first 15 strokes.”

Callahan liked what he saw from his entire crew. “My assistant coach said the most impressive boat out here today was the 1V,” he said. “Our other boats had been performing well all week, but those guys really brought it today.” 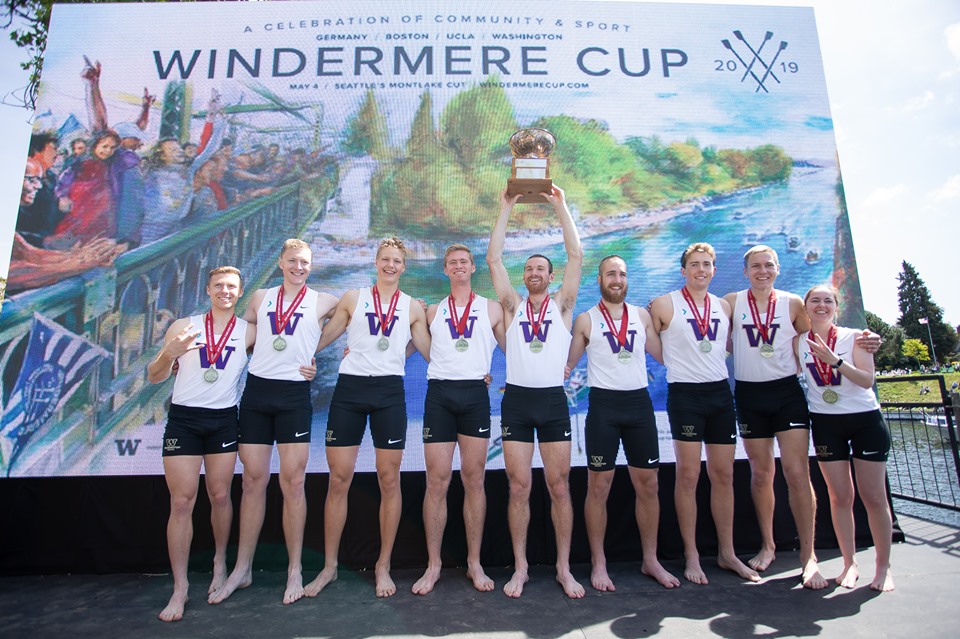 The UW women’s V8 included two German-born rowers, junior Tabea Schendekehl (stroke) and senior Calina Schanze (seventh seat). In March, the two flew to Germany and won the women’s pairs title in the Germany national championships. “This was my last Windermere Cup and it was against my own national team, so obviously I’m happy we edged them out,” said Schanze, a likely future German Olympian. Schanze says she has rowed with most of the women in Germany’s boat, most of whom are training to compete for Germany in this year’s World Championships.
The German national team ranks among the world’s elite crews. “A lot of these guys today will take over for some of their best guys after the Olympics in Tokyo,” Callahan said. “They have a little bit more of a trajectory for the summer, and we’re a little more right now. (The national championships are May 31-June 2.) They’re very similar to us in ability. One of the reasons to bring the Germans and BU in here is we want some of the world’s best, so we learn about ourselves and challenge ourselves,” Callahan said. “That’s what we got. These guys helped us raise our level. We’re trying to go from good to great. I don’t think we’re there yet, but definitely today was a big step.”
The great weather produced a substantial turnout of thousands of spectators. “I thought last year crowd was big,” Callahan said. “But this year, I was like, whoa.” Boston University made its first Windermere Cup appearance. “We knew it was going to be a big event,” said BU coach Thomas Bohrer, “but I didn’t realize there would be so many people watching..” Said German rower Charlotte Korner: “It was really amazing, all of these people. There were more people here than for the Under-23 World Championships. At one point in the race I just had to laugh, to see all these people. It makes you want to give all you have.”
A video tribute for former UW rower Blake Nordstrom, who passed away earlier this year, was played before the men’s final race. Callahan hosted Nordstrom’s family in a vintage wood launch named Husky II, which Nordstrom rebuilt for UW. “That was really special for me to show it to them,” he said. “He meant a lot to the program and to me.”
Previous
Next