One of the last big chunks of land in the booming Seattle neighborhood of South Lake Union will turn into a life sciences hub — with proceeds of the sale helping fund affordable housing and homelessness issues.

The City of Seattle announced today that it will sell the so-called Mercer Mega Block to Alexandria Real Estate Equities, a developer of biotech and life sciences spaces. The landmark deal clears the way for Alexandria to build out a campus surrounded by fast-growing tech giants that will boost Seattle’s life sciences cred while arming the city with more resources to tackle pressing issues.

Alexandria is paying $138.5 million for the 2.86-acre site, which includes two full city blocks along the busy Mercer Street corridor and part of a third. It is also making a one-time $5 million contribution to help the city address homelessness. In addition, Alexandria pledged to build an affordable housing tower on one of the sites with at least 175 units and dedicate a portion of the campus to a city-run 30,000 square-foot community center.

“This was a generational opportunity to take an underutilized city-owned property and to make a real transformational investment to create jobs, to create more affordable and mixed income housing, and to build more safe transportation connections,” Mayor Jenny Durkan said at a press event with reporters on Friday.

Durkan called it “one of the most consequential property deals the City of Seattle has ever done.” The mayor held a public event Wednesday morning at the site to announce the deal.

Alexandria was one of six bidders for the site, Durkan said. During a highly competitive bidding process, the city asked contenders to sweeten their offers, and Alexandria upped its price by roughly 40 percent. Alexandria, which has been developing land in Seattle for more than 20 years and played an important role in the genesis of the South Lake Union neighborhood’s biotech and life sciences sector, was willing to pay a steep price for the critical site.

“We feel it’s really the heart of the heart, and this is the last large block of land left to develop,” Joel Marcus, Alexandria’s co-founder and executive chairman, said in an interview with GeekWire.

The design process for the campus is just beginning. Alexandria representatives said they didn’t have any concrete details to share on that front and it hasn’t secured any tenants for the campus yet.

The company will be able to build up to 175 feet for the life sciences buildings and 280 feet for the residential tower. Durkan said Alexandria is considering increasing the size of the housing tower, adding as many as 190 market-rate units to go along with the affordable apartments.

Seattle’s City Council will now have to approve the deal; a vote is expected in September. Seattle officials estimate the transaction could close in 2020 to pave the way for construction to start soon after or in 2021.

The City of Seattle plans to use the bulk of the sale proceeds to address affordable housing and homelessness issues, which have been inflamed by the recent tech boom. It will spend $78.2 million toward housing and $25.9 million on transit improvements. The city previously borrowed against the sale proceeds to pay for recent work along the Mercer corridor, so $29.1 million will be used to pay back that loan.

“As this city has become more expensive, the people who have suffered the most and been pushed out the quickest are communities of color,” Durkan said. “We really want to be able to use these resources to remedy and address displacement in a way the city has not had the resources to do before.”

City officials estimate that the bid includes public benefits of $275 million to $305 million. 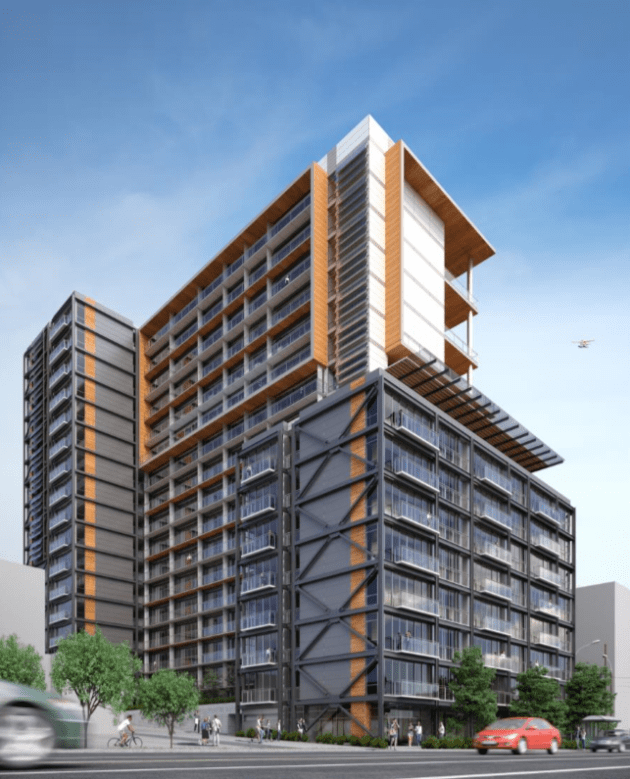 A representation of what the apartment tower could someday look like. The rendering does not represent Alexandria’s actual design as the process is just beginning. (City of Seattle Rendering)

The site, which the city was using to house construction equipment, could be the centerpiece of an emerging biotech and life sciences hub. To the south are a series of University of Washington School of Medicine buildings. Across the street to the east is the Allen Institute for Brain Science, and the Bill & Melinda Gates Foundation is just a stone’s throw away.

The site is also two blocks from the new Google Cloud campus and kitty corner from an Amazon Building. Facebook’s giant engineering office is also nearby.

The campus gives Alexandria a crown jewel in its growing Seattle portfolio. Marcus said the company has about 1.5 million square feet of space in Seattle, with another 500,000 square feet under construction.

Alexandria owns a cluster of life science projects in the Eastlake neighborhood, just down the road from the Mercer Mega Block site. One of those buildings will be home to a new headquarters for newly-public company Adaptive Biotechnologies, which just inked a lease to triple the size of its main office.

Alexandria first came to Seattle back in 1996 when it bought the original Fred Hutchinson Cancer Research Center campus on Seattle’s First Hill, renovated it and leased it back to Fred Hutch. The proceeds of that deal helped Fred Hutch build out its campus in South Lake Union, which served as a catalyst for the neighborhood’s development in future years.

Seattle is one of the nation’s top emerging life sciences hubs thanks to institutions such as the UW, Fred Hutch and the Gates Foundation. But it is not in the same tier as markets like Cambridge, Mass. and San Francisco, where Alexandria is very active.

In the past, lack of lab space has held back the Seattle biotech industry, but Marcus pointed to another problem.

“The depth of companies hasn’t been what it is in the other communities,” he said. “That is less space related than it is more capital related.”

Marcus pointed to a couple of biotech and life sciences-focused venture capital companies active in Seattle, including Alan Frazier’s Frazier Healthcare Partners and ARCH Venture Partners. However, they pale in comparison to the roughly 20 to 30 biotech-focused VC firms active in the Cambridge area.

In addition to providing space for companies to grow, Alexandria also wants to invest in up-and-coming firms. The company offers a Seed Capital Platform to help biotech firms raise cash and a startup incubator called LaunchLabs. Earlier this year, Alexandria said it will expand the programs to Seattle.

“It’s almost like you are putting seeds in the ground to harvest three, five, seven, 10 years from now,” Marcus said.

Article by Nate Levy
This post originally appeared on GeekWire.com